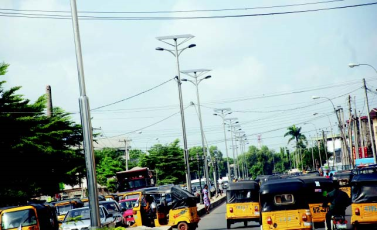 Governments all over the world exist to protect the lives and properties of the citizens by creating the enabling environment for people to live without fear. One way of doing this is by providing street lights in urban and rural areas alike.

Depar Solar Group is proud to be part of improvement in Nigerian States.

Governments all over the world exist to protect the lives and properties of the citizens by creating the enabling environment for people to live without fear. One way of doing this is by providing street lights in urban and rural areas alike. CHRIS NJOKU reports that street lights are now transforming the way the people in Imo live, especially at night.

The Imo State Government has been blazing the trail in the installation of street lights in urban areas. Since 2011, the administration of Governor Rochas Okorocha he has made appreciable progress in the installation of street lights install street lights on all important streets in Owerri, the state capital. Today, most of the streets and roads boast of solar powered lights. Definitely, this security measure is informed against the background of increasing insurgency and threats to lives and property by the Boko Haram sect. Definitiely, security has for long been a subject of utmost concern in all countries of the world and governments have not only increased their surveillance measures but also improved on the technologies for reducing crimes in their respective countries and Nigeria is no exception.

In the past four years, the country has witnessed a lot of heinous crimes mainly carried out at unholy hours of the day. Most times these acts were carried out in churches, motor parks, shopping malls and on highways.

The recent bombings in some parts of the country particularly in the north and the foiled attempt at the premises of the Living Faith World Bible Church, a.k.a. Winners Chapel in Owerri, Imo State brings to fore, the need to improve street lighting to reduce crimes in urban areas and on the highways.

Improved street lighting has been thought to be an effective way of crime prevention, second only to increased police patrol. Indeed, residents in crimeridden neighborhoods often demand that street lights be installed, and recent research has established that improved lighting reduces crime, especially at night.

This is so due to the fact that many of the crimes committed in the country, including the planting of explosives were reported to have taken place at night. That is why it has been difficult to identify or arrest most of the perpetrators. Social commentators and technical experts say that illuminating the environment can minimise the perpetration of some crimes.

A technologist, Mr. Gabriel Iwuji, said improved street lighting is an effective means of crime prevention, especially in remote and secluded areas. He said that it should be the top priority of any government to improve street lighting, especially within residential or populated areas.

And the three towns seem to have different characteristics in their development patterns.

Owerri the capital city has expanded in leaps and bounds over the years. Academic pursuit, commerce and civil service hold sway here. The New Owerri capital city is a sight to behold, with its numerous green facades and illuminated streets.

A drive along Concorde Hotel area, Owerri-Port Harcourt, Wetheral Road, Assumpta-Bank Road, Shehu Musa Y’adua Road and Aba- Owerri Road at night, shows that the lights are well illuminated. Before now theroads were death traps, as accidents were a frequent occurrence on them, especially at nights.

Also, the main roads entering Owerri which were often a motorist’s nightmare owing to the congestion and increasing population have experienced makeover, thereby easing traffic gridlock.

The same can be said of Okigwe, another fast developing urban centre in the state. Located on a hill along the Port Harcourt-Enugu Expressway, the town now wears a new look and with street lights to compliment the development.

Orlu, another fast developing town, Orlu is also witnessing the advent of street lightings and other urban renewal infrastructure. And with too many urban roads in tow – some drained and asphalted, the town is witnessing rapid urban renewal measures.

While commissioning the street lights installed in Orlu recently, Governor Okorocha expressed his passion to transform Imo State, adding that industries, factories, healthcare services, hotels and many other projects that will enhance the people’s living standard are to be put in place in the area to create jobs for the teeming unemployed youths and reduce urban influx.

“With the installation of the street lights, security in the state has been improved to a great extent and thereby reducing kidnappings and other criminal activities to barest minimum”, he said.

Speaking at the occasion, Senator Osita Izunaso, described the installation of streetlights in Orlu as a beginning of a new era, as such has never been since in that part of the state.

Also, the Commissioner for Works, Ichie Best Mbanaso, described the administration as one with a vision, pointing out that in trying to beutify the town many buildings were demolished but something greater was put in place to transform the place. Speaking while inspecting some projects in Owerri, the governor noted that the government was determined to improve the aesthetics of the state by covering drainage channels, installing street lights in line with the city’s development plans and designs. So far, some urban experts have enumerated the benefits of street lighting.

According to an engineer, Mr. Michael Ogbugbaja ”street lighting promotes security in urban areas and increases the quality of life by artificially extending the hours in which there will be light so that activity can take place. Street lighting also improves safety for drivers, riders, and pedestrians”.

Driving outside of daylight hours is more dangerous – only a quarter of all travel by drivers is between 7pm and 8am, yet this period accounts for 40 per cent of fatal and serious injuries to the same group. Pedestrians and vulnerable road users suffer from decreased visibility in the dark. For these reasons, any action that reduces the risk to road users at night is welcome.

A recent study for the state Ministry of Transport found that road safety was perceived as a key benefit for street lighting improvement. In the study, 73 per cent of respondents agreed that ‘better street lighting would improve the safety of children’ and 63.8 per cent said that ‘improved street lighting will lead to fewer road accidents’.